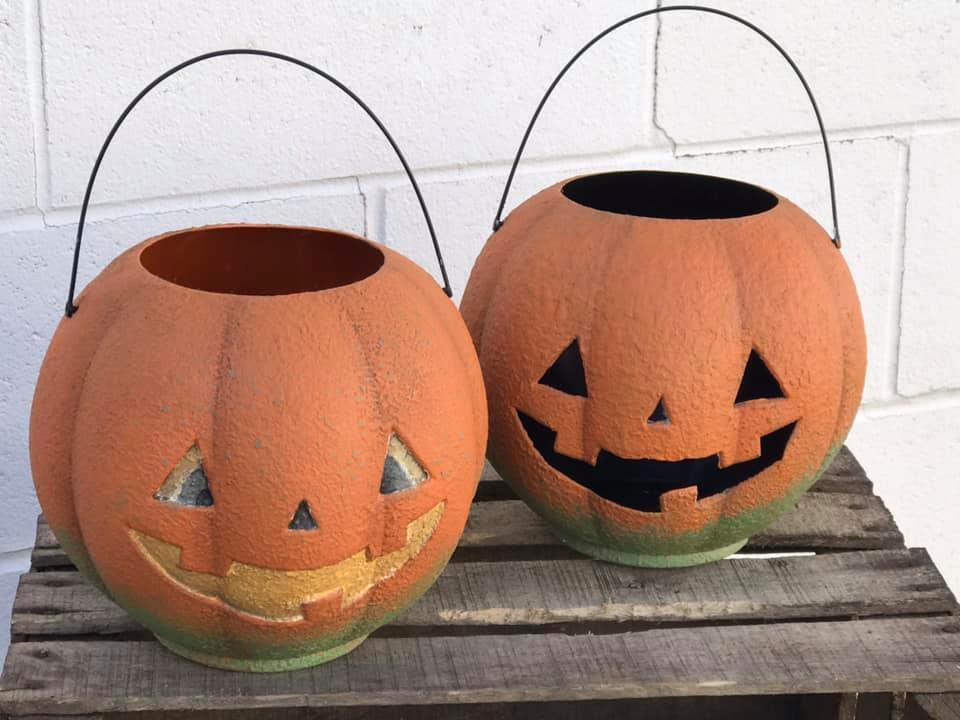 A few years back, we were feeling the pumpkin love and made cement pumpkins in the fall. 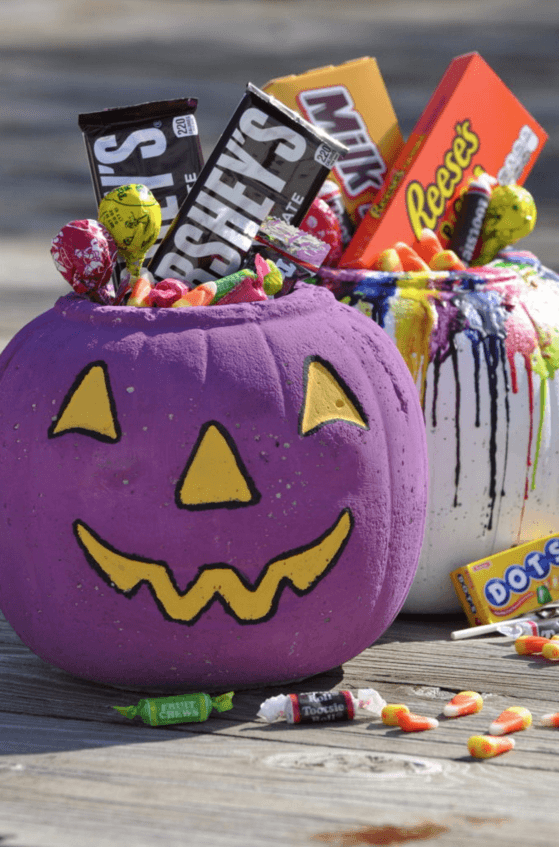 This year, we decided to go from plastic to fantastic! Just doing our part to making plastic pumpkins great again! We picked up a couple of dollar store pumpkins (one black and one orange) then got to work. 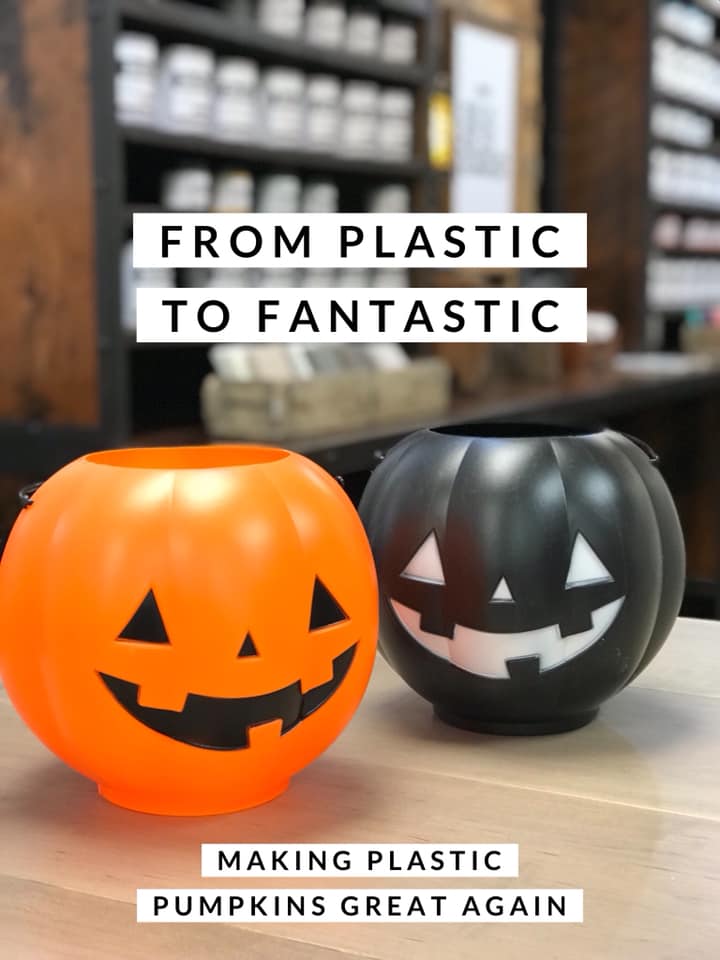 The inspiration for painting them came from the old vintage paper mâché pumpkins from Halloween’s past (those things are scary lookin’). 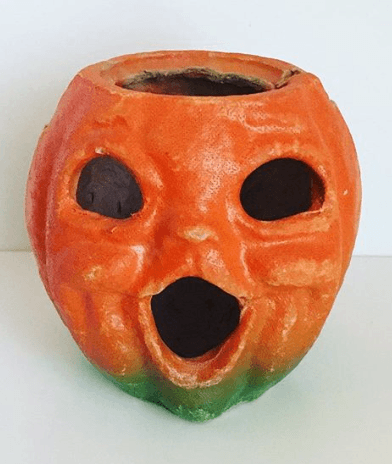 First, we cut the face out of the plastic pumpkin. 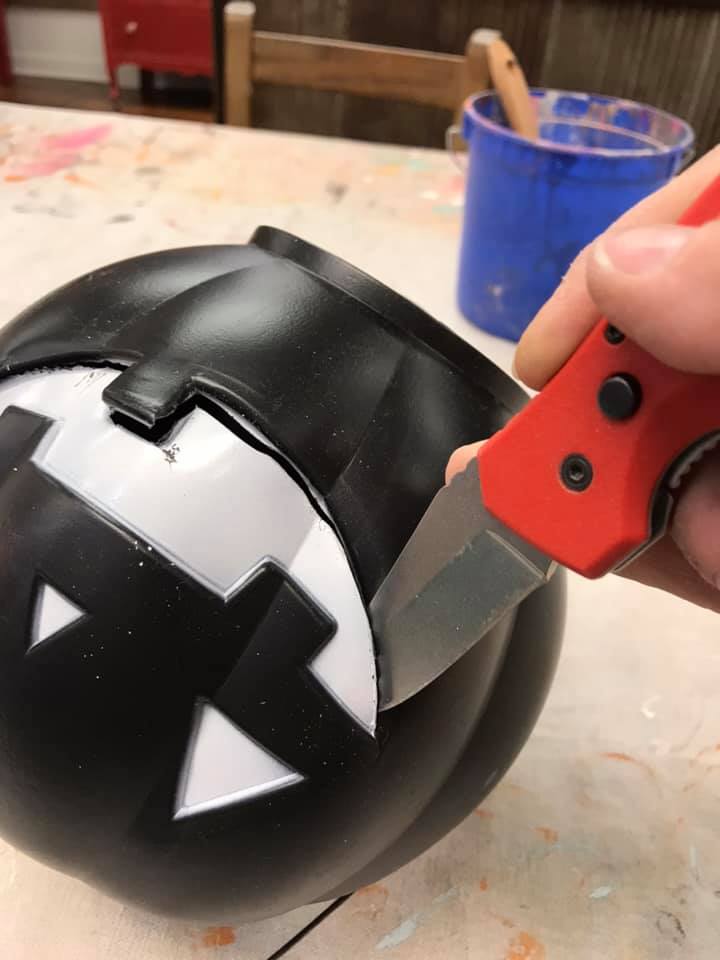 We bought a black pumpkin thinking we could cut the face out so we could put a battery operated candle inside and thought the black background would be nice for that. Cutting the thin plastic wasn’t as easy as we’d hoped but we managed to get it done without a visit to the ER. 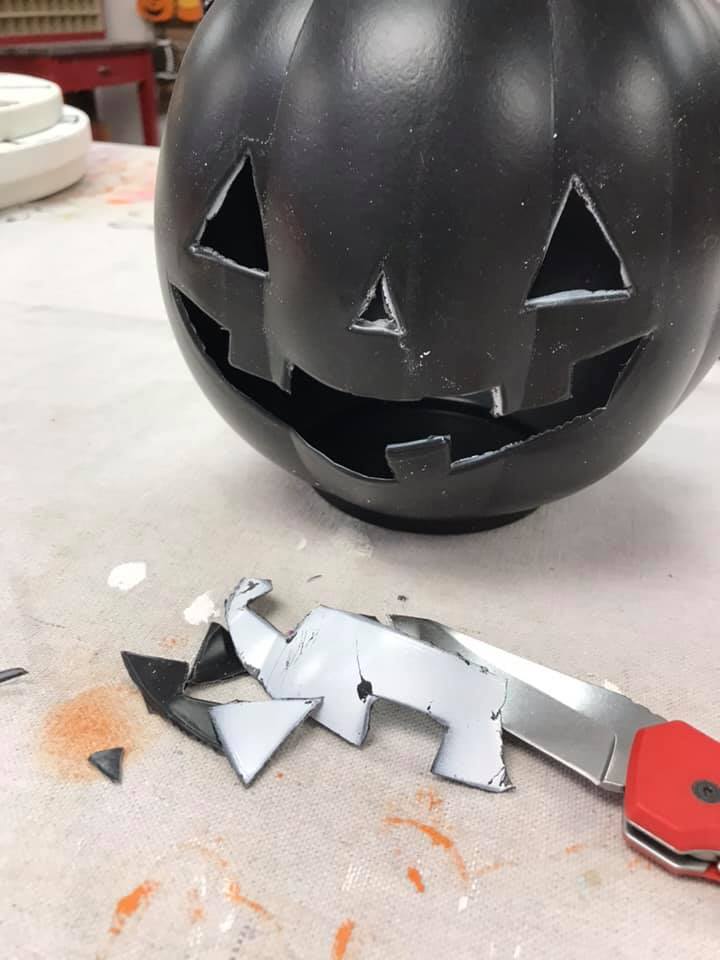 Next, we applied a coat of Bungalow 47 primer to the plastic because we knew we would be adding a pretty thick layer of paint on it and wanted to see if this would help it stick, and it did. 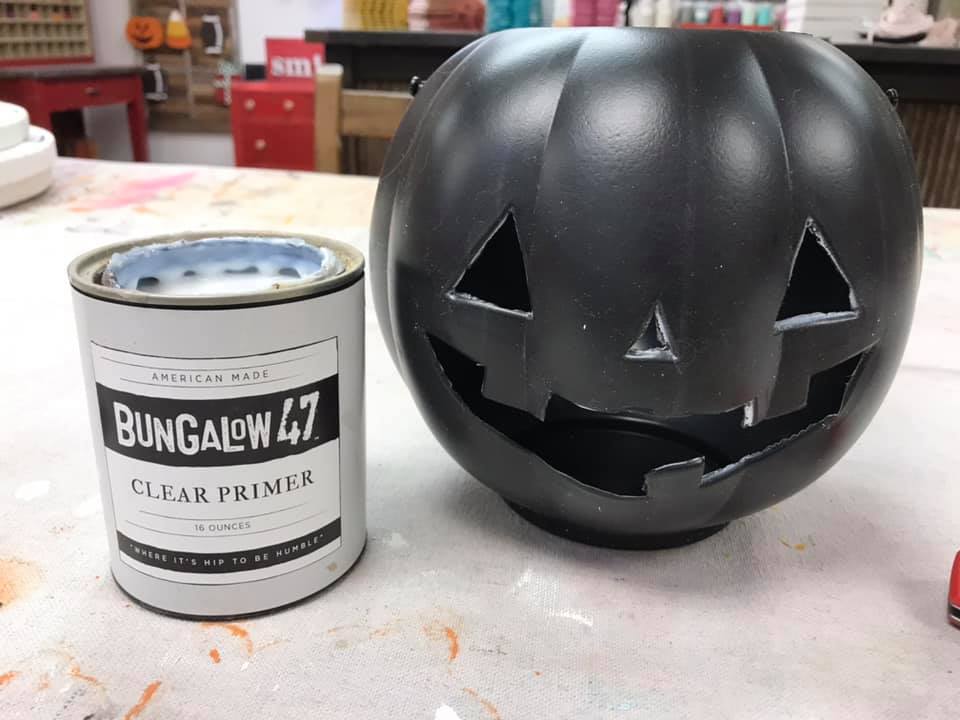 We didn’t use the primer on the orange one and some of the paint is chipping off on the bottom so we think the primer was a good choice. There is probably a bit of some sort of oil residue on the pumpkin surface from manufacturing, and since oil and water don’t mix, washing it with a degreaser would have been a good idea too. 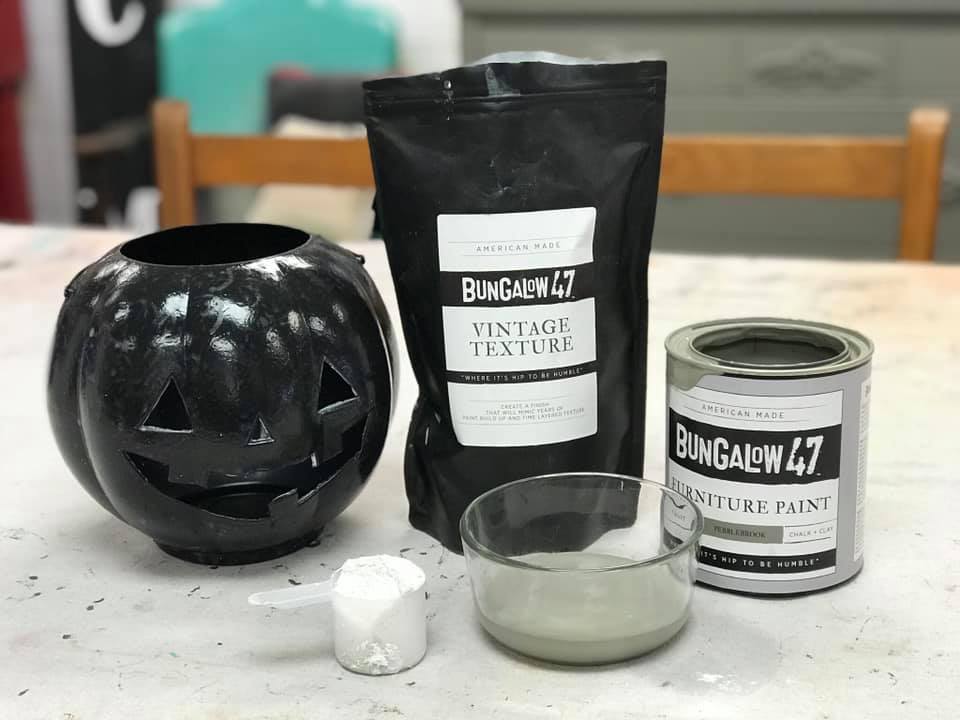 After priming the pumpkin, we mixed some Vintage Texture with the color Pebblebrook (gray) to create a super thick paint. The texture product is a key ingredient to achieving this vintage look. 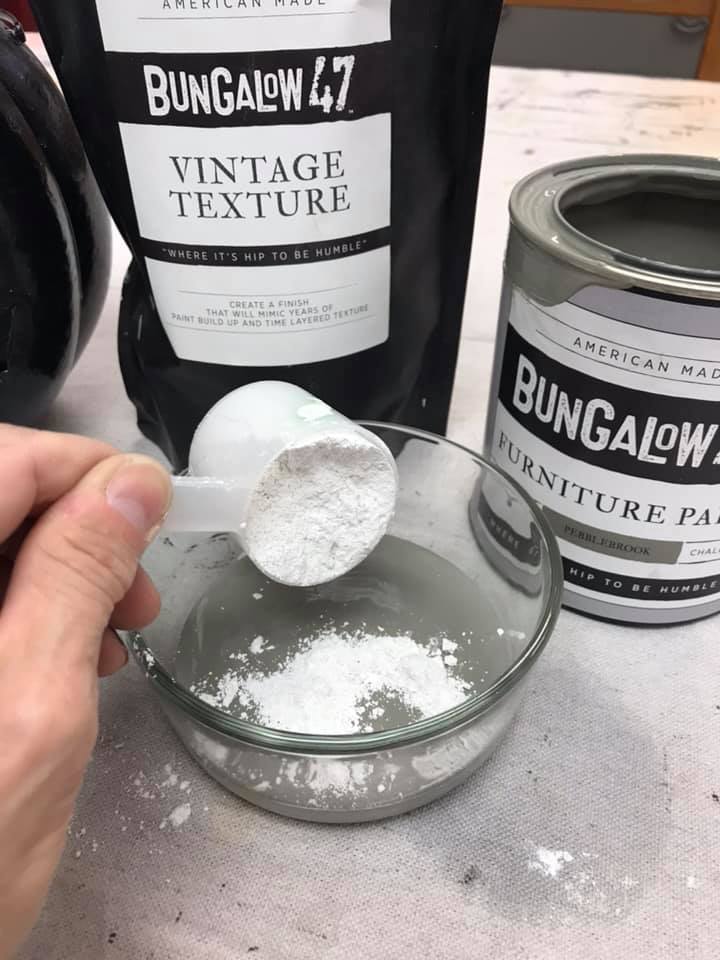 We pounced the thick paint on the pumpkin, creating peaks and valleys and let it dry. 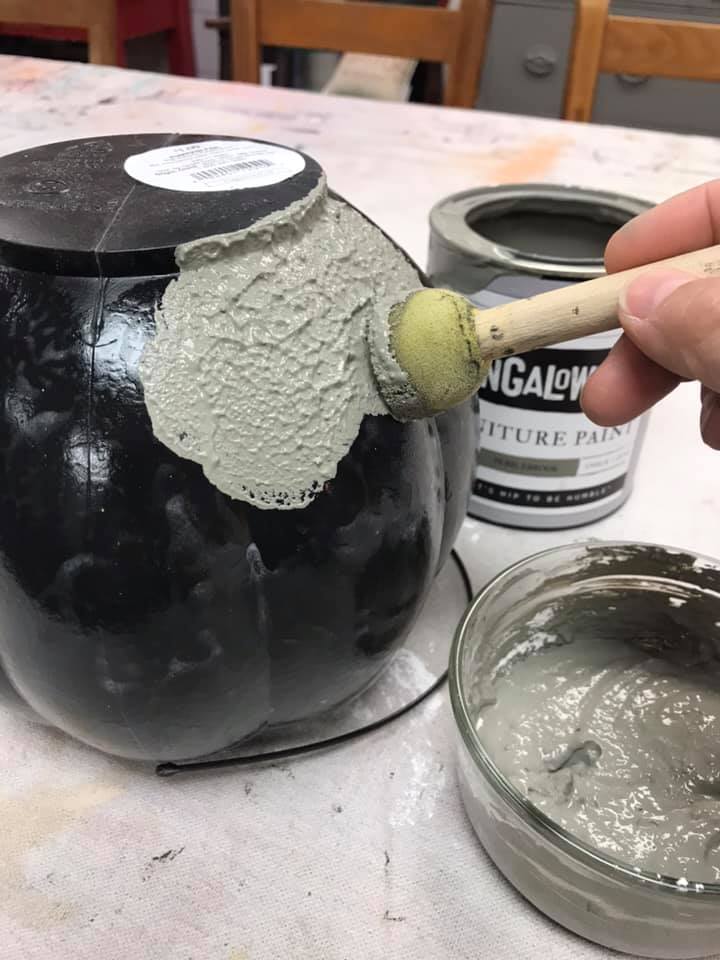 Before it completely dried, we took another foam brush and knocked the textured paint down, which gave a crusty looking finish. 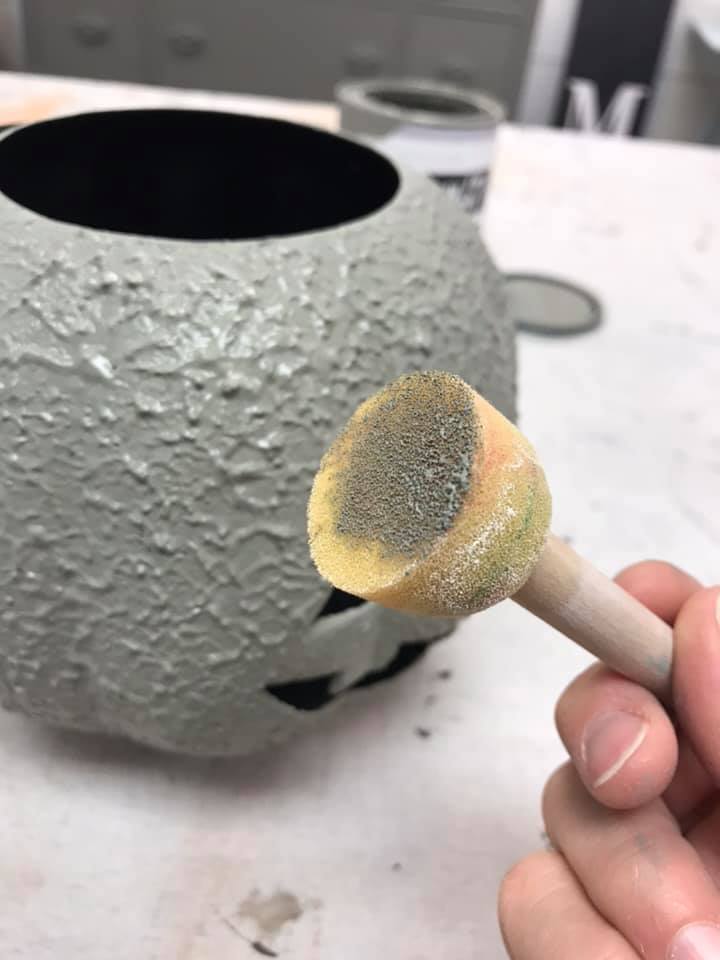 After that layer dried, we pounced the orange paint, a color called Terracotta Tile, on top of the dry textured gray paint. 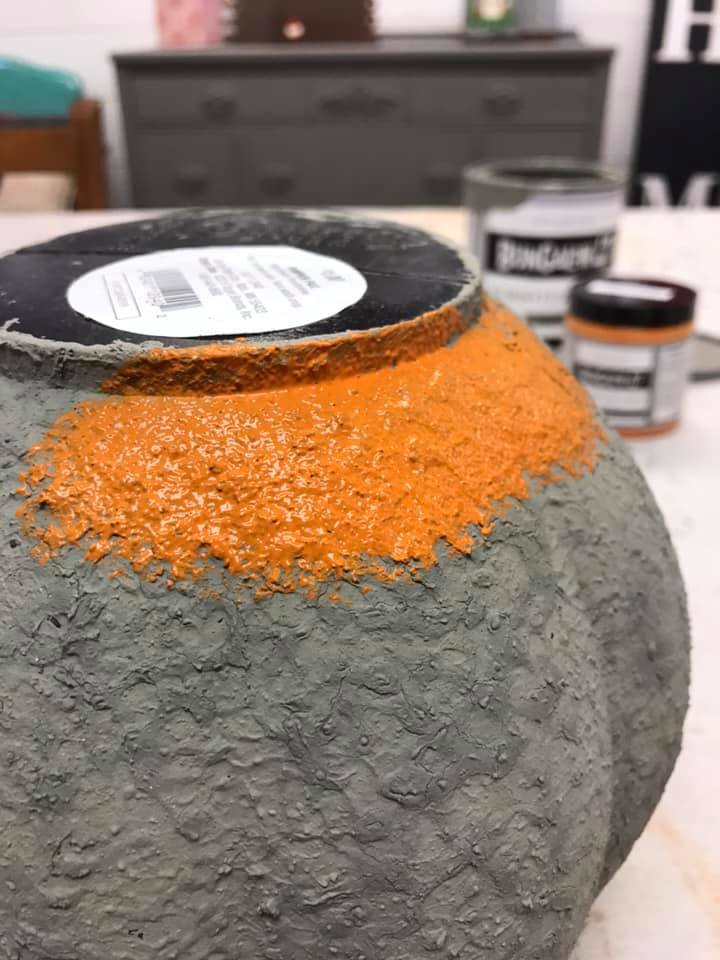 Then we mixed the orange paint in with the gray paint mixture (creating an olive green color) added some bright green Bungalow 47 paint called Front Lawn, and began blending the green paint around the bottom of the pumpkin. 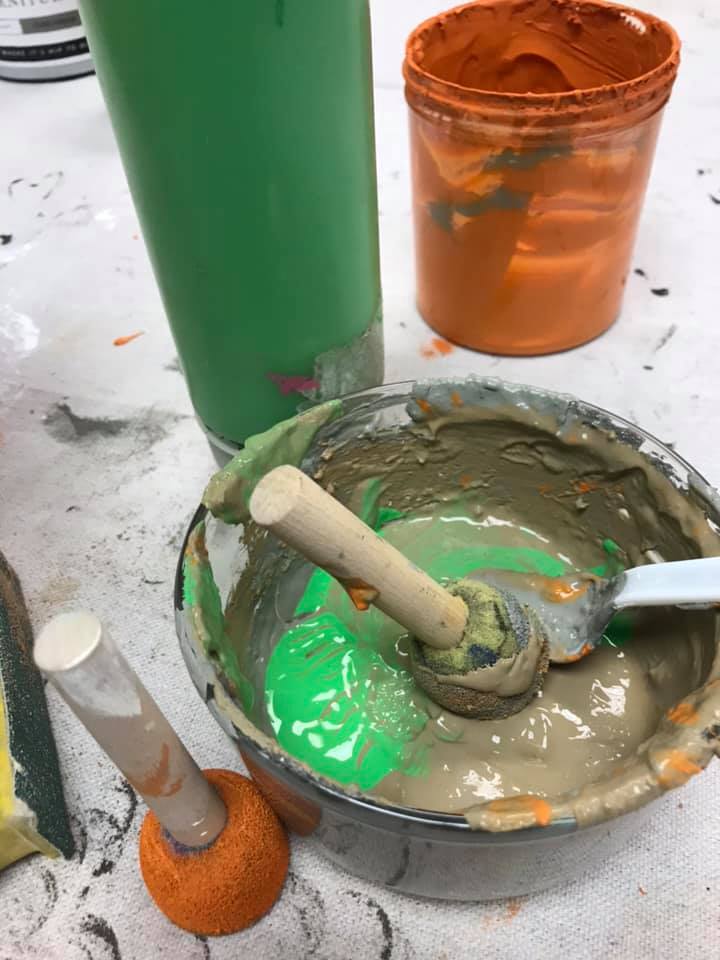 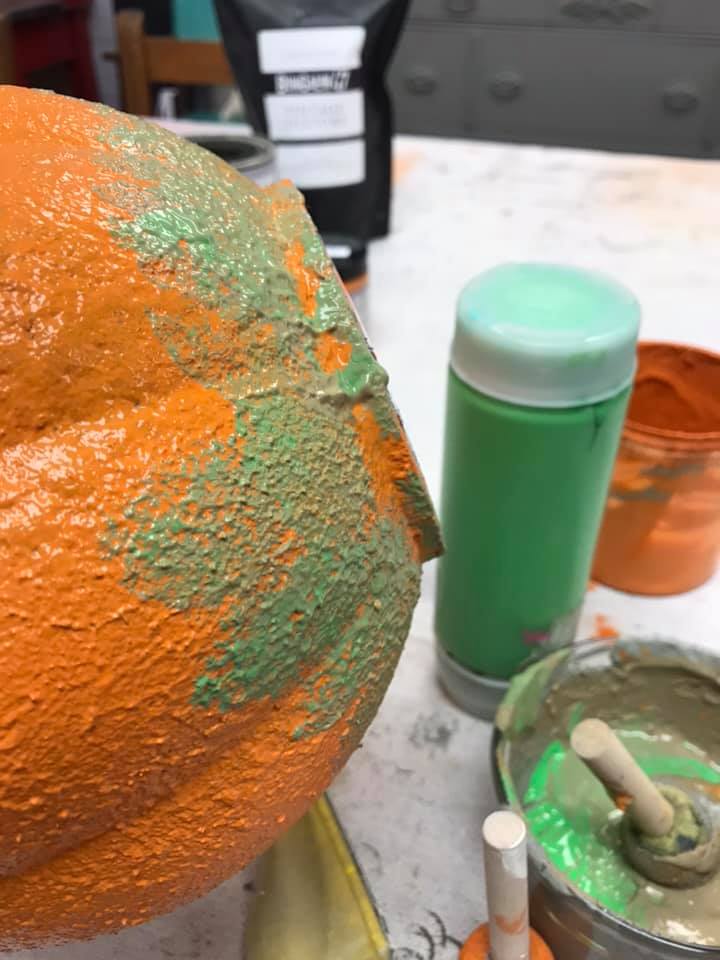 After it was completely dry, we took a sanding block and sanded the surface of the orange paint. This allowed the gray texture to pop through. 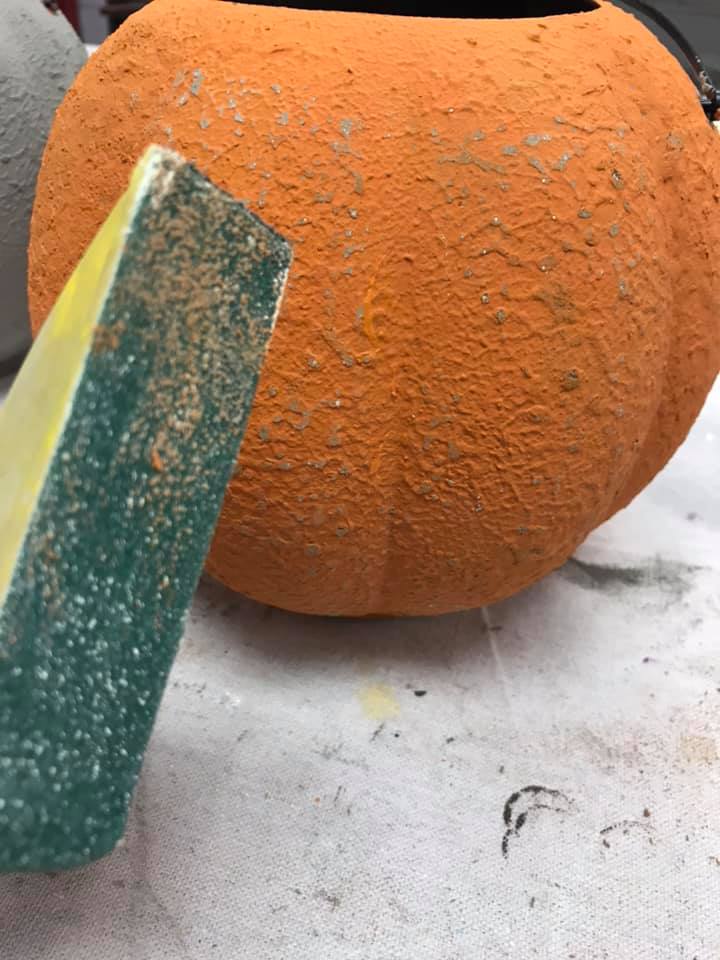 Once satisfied with the sanding, we finished it with some light and dark wax to highlight the grooves of the pumpkin and give it that aged look. 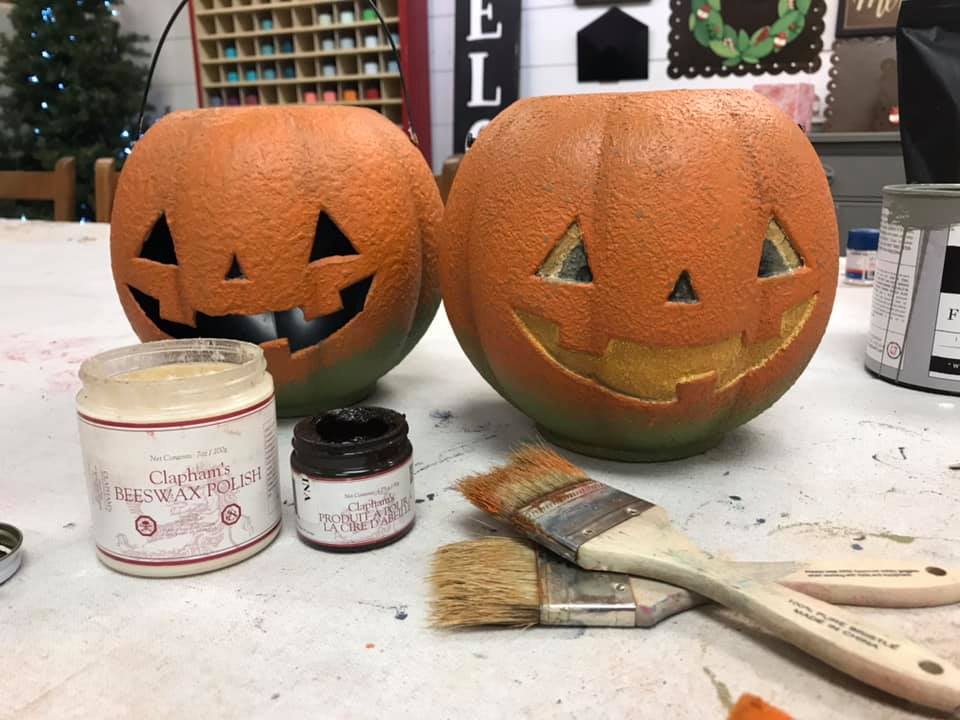 We’re pretty happy with how they turned out, and love the difference between the one we kept with the face intact and the one that we can light up for that spooky Halloween glow! 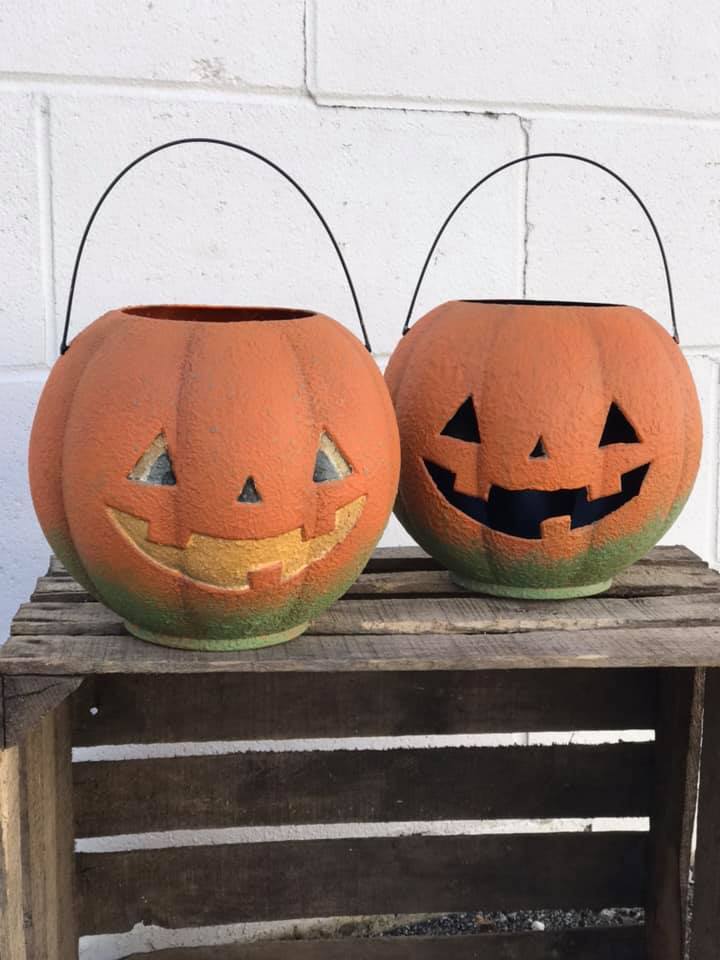 Since everyone is crafting crazy these days, we also made it easy for you to get your projects done with a high quality paint, and are now selling a 2 ounce size of all Bungalow 47 colors. You can shop here. Thanks so much for joining us, and Happy Halloween crafting!

At Bungalow 47 Furniture Paint, we are passionate about our products. We don't just sell paint, but we USE that paint every day. We know retail is hard, especially now in our "buy with one click" universe. We wanted to have a product that would help small businesses create a niche and an experience for their customer. We've created a high-quality chalk and clay paint that you can count on, in tried and true shades and on-trend colors. Follow us as we share ideas using our zero VOC, solvent-free, and American-made paint. 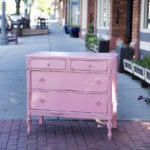 At Bungalow 47, we are passionate about personal style and making creative spaces. We love to inspire our clients to make their homes reflect who they really are. That's why we created a paint line, to give furniture and other items new life and a new look. Our high-quality chalk and clay paint is easy to use, dries quickly, and comes in tried and true shades and on-trend colors that can bring that "wow factor" to any room. Follow us as we design, inspire and paint using our zero VOC, solvent-free, and American-made furniture paint.